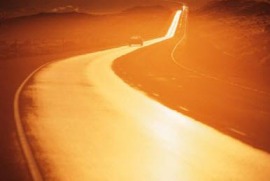 More information about hydration can be found in Nutrition for Cyclists: Eating and Drinking Before, During and After the Ride which can be purchased on Amazon.com.  For information about the book and how it relates to what I’ve posted to Tuned In To Cycling, please check out this post.

It’s hot. It’s humid. Even worse, it’s hot and humid. How do you handle heat and humidity on a ride? You already know the answer. Hydrate. Is there anything else you can do? Yes, but hydration is far and away the most important thing you need to combat heat and humidity. Understanding how heat and humidity affects you when you’re riding (or engaging in any other kind of exercise) can help you counter their ill effects.

How the body keeps cool

The human body is a homeostatic system. This means it adapts to changing environmental circumstances in order to maintain certain physical and physiological parameters within acceptable boundaries. One of the most important of these parameters is core temperature. Combating heat and humidity is mainly about keeping core temperature down. 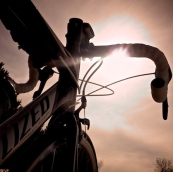 Our bicycles are extraordinarily efficient machines. Under optimal circumstances approximately 99% of the energy put into the pedals is transferred into forward motion; only 1% is lost. Unfortunately, our bodies are not nearly as efficient. Approximately 75% of the energy generated by physical activity is lost as heat. The heat generated by our muscles raises body temperature when we exercise. The harder you go, the more heat you make and the more stress you place on your body to shed that heat and keep core temp down.

There are two main ways the human body sheds heat. When the temperature of the body is higher than the temperature of the surrounding environment heat is shed through conduction and radiation. Here’s how this works for the cyclist. Your working muscles generate a lot of heat. Much of this heat is transferred to the blood which carries it away from the working muscles. When blood temperature reaches a particular threshold, vasodilation (expansion of the blood vessels at the surface of the body) occurs which brings a larger proportion of the blood into close contact with the surface of the body where it can shed its heat to the surrounding environment. When you stand close to a person who has been exercising hard you can feel the heat coming off their body. That’s heat that has been shed through conduction and radiation.

The second way the body sheds heat is through evaporative cooling. When core temp rises to a critical threshold, the sweat glands are triggered and sweat is produced on the surface of the skin. The sweat evaporates and the evaporation cools the body. Under most circumstances, and especially when it is hot outside, evaporative cooling is the main way the cyclist sheds heat.

How increased core temp can hurt you

The bad news is that loss of body fluids can produce severe dehydration and heatstroke. The symptoms include headache, nausea and vomiting, sweating stops or is severely reduced, very rapid breathing and heart rate, confusion, delirium, loss of consciousness, death. Heatstroke is a life threatening medical emergency. In a lifetime of athletic activity that has produced broken bones, snapped tendons, knocked out teeth, severe lacerations and several surgeries, the one time I suffered serious heatstroke (while running in competition) was – easily, hands down, no contest, and by far – the worst physical experience of my athletic life. You don’t want to go there, it’s terrible.

How all of this affects the cyclist 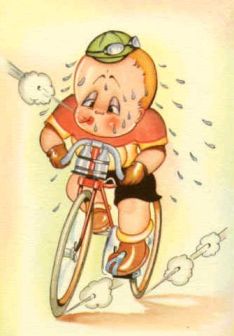 Heat is bad. As the air temperature rises, the difference between body and air temperature decreases which weakens or eliminates conduction and radiation as methods of shedding heat.

Humidity is worse. Evaporative cooling is the primary way humans shed heat and it becomes even more important when exercise is producing a lot of excess heat. Humidity is an index of the amount of water vapor in the air; the higher the humidity, the more the air is saturated with water. The more the air is saturated with water, the less water it can take on which means that sweat is less likely to evaporate. The body continues to produce sweat so that evaporative cooling can bring body temperature down, but the sweat rolls off the skin rather than evaporating and cooling the body.

Heat combined with humidity is the worst of all. High heat coupled with high humidity sabotages both of the body’s mechanisms for shedding heat. The high air temperature reduces or eliminates conduction and radiation and the high humidity reduces evaporative cooling.

What can you do about it?

First and foremost – HYDRATE. Drinking water won’t cool you directly but it will replace the fluid you’re losing to sweat. This is critical for avoiding dehydration and heatstroke. Don’t screw around with this. Heatstroke can kill you.

How much should you drink? It depends on how much fluid you are losing to sweat and this will vary as a function of many factors such as how hot it is and how hard you’re working. Don’t use feeling thirsty as an indicator of whether or not you need to drink. The body is relatively slow to send thirst and hunger signals. You will usually have lost 1% to 2% of your body weight in fluid loss before you get the thirsty signal. By that time you’re already losing the battle of shedding excess body heat. A common mantra for cyclists is “Drink before you’re thirsty.” It’s great advice. Drink small amounts often rather than large amounts less frequently.

It’s possible to overhydrate which can lead to a condition called hyponatremia where there are abnormally low levels of sodium in the body (the excess water dilutes the sodium). This can also be life threatening although it rarely is. When hydrating your goal is to continually replace the fluid you lose through sweating without going to extremes with either too much water or not enough. For the cyclist riding in heat and humidity it’s better to err on the side of limiting dehydration as opposed to limiting hyponatremia. Don’t prepare for riding by drinking liters of water beforehand and be sensible on the bike. A future post will look at hyponatremia in more detail.

Wear the right clothing. No clothing at all would be optimal but sunburn, chafing from the bicycle seat and indecency laws make that impractical.  If you’re not going to go nude, you want form fitting clothing that wicks moisture. Loose clothing traps air between the cloth and your skin which acts as insulation and reduces evaporative cooling. Wicking material moves the sweat from your skin to the air where it can evaporate and cool you. Cycling clothing has both of these properties so if you wear tight fitting cycling shorts and jerseys, you’re good. If you ride in a loose fitting cotton shirt, you’re asking for trouble when it’s hot and humid.

If you’re not racing, consider ramping down your work level on hot and humid days. If you ride at a slower pace, your leg muscles aren’t working as hard and are producing less excess heat.

If you have enough water, pour it on yourself. Evaporating sweat and water both produce evaporative cooling. Remember, though, that the water will do more to help you when it’s inside your body than when it’s on the outside. Don’t become dehydrated because you poured your water over your head.

6 thoughts on “Cycling in Heat and Humidity”