Should you wear a bicycle helmet when you ride?  Look at the data.  In 2006 The Insurance Institute for Highway Safety published data on cyclists who were killed in traffic accidents from 1994 – 2006.  In 1998, 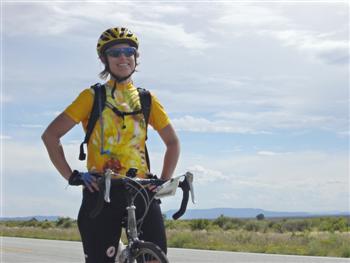 98% of the cyclists who were killed were not wearing a helmet; 2004 was the “best” year when the figure was 83%.  The percentage of dead cyclists who were not wearing helmets was 90% or greater for 8 of the 13 years covered in the report.  Not all of these cyclists died as the result of head injuries but the majority of them did.  Cycling deaths due to head injury are typically around 75%.  Would wearing a helmet have prevented most of those deaths?  The most often cited source for the effectiveness of cycling helmets is a paper published in the New England Journal of Medicine in 1989 that concludes that wearing a helmet reduces the risk of serious head injury by 85% and serious brain injury by 88%.  There are a lot of ways you can hurt yourself when you have a bike accident.  Are head injuries common?  The US Consumer Product Safety Commission issued a report based on data from 2004 that indicated that the estimated number of head injuries that required emergency room treatment was greater for cycling than for any other sport.  In fact, cycling was estimated to produce more head injuries requiring emergency-room treatment than the next four sports (baseball, football, skateboards and kick scooters) combined.  Should you wear a helmet?  It’s a no-brainer, or rather you’re a no-brainer if you don’t wear one.

Okay, so if you have any sense at all, you wear a helmet.  What kind of helmet should you buy?  A while back a good friend of mine who rode a Harley Davidson was pissed that the state we lived in had passed a motorcycle helmet law.  Like a lot of motorcyclists he thought helmets were for sissies.  We went to the motorcycle shop and found helmets ranging from $10 to $50 (lol it was a long while back).  He knew nothing about helmets, couldn’t see any difference between the two, and reeking of testosterone-fueled attitude, asked the guy who worked in the shop why he should buy a $50 helmet when there was one for $10 that didn’t look any different.  The guy, who was used to dealing with bikers, gave my friend a dead-eyed stare, let the silence drag out, and said “You got a $10 head?  Wear a $10 helmet.”

Mass-market retailers sell bicycle helmets for less than $20 while the latest professional-level helmet that is virtually identical to the ones riders in this year’s Tour de France are wearing can be had for about $230.  Do you need a $230 helmet for your $230 head?  Actually, no.  Although compliance is voluntary, virtually all helmets sold in the US meet the product safety standards for bicycle helmets established by the US Consumer Product Safety Commission in 1999.  You might want to double check the real cheap helmets sold by places like Wal-Mart but it’s highly likely that any helmet you want to buy will meet these standards.  This means that there is no real difference in protection between a $20 helmet and a $200 helmet.  So, what’s the difference?  The more expensive helmets are made for serious road riders or bike racers.  They weigh less and usually feature much improved air flow through the helmet which can play an important role in allowing the rider to dissipate heat.  Advanced riders will often do high-intensity rides that last for hours.  On a ride like this managing hydration and keeping body core temperature down can be a major problem and the cooling characteristics of helmets that are designed for these types of rides can be a significant factor.  It’s also not uncommon for the more expensive helmets to have more ways to adjust helmet fit and easier ways to adjust fit while you’re riding than the cheaper helmets.

Another factor that plays into the cost of the helmet is style.  Cycling gear is beset with a bad case of “you have to have the latest thing”.  The $230 price tag is for this year’s model, last year’s model costs about $100 less.  Unless you’re a slave to fashion, a top-end cycling helmet can usually be had in the $100 to $150 range.

One of the things we see on the road all the time is parents going for bike rides around the neighborhood with their young children.  The parents are beaming with pride with a “aren’t we a fine family spending quality time with our kids” demeanor.  The kids are always wearing helmets and the parents often are not.  Reminds me of those old cartoons where the parent is standing there with a drink in on hand and a cigarrette in the other yelling at their kids “If I ever catch you using drugs, I’ll beat you within an inch of your life.”  Don’t be a dumbass.  When you insist your kids do one thing while you do the opposite you’re teaching them that (a) you’re a hypocrite and (b) it isn’t really all that important no matter what you say which means that (c) you’re full of shit and they don’t have to listen to you.  You want to impress on your kids how important it is to wear a bike helmet?  Wear one yourself.