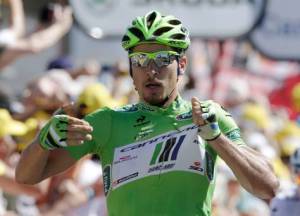 Peter Sagan is a polarizing rider.  On the one hand his juvenile attempts to draw attention to himself with last year’s ridiculously self-conscious displays on the bike when he won a race and this year’s grabbing of the podium girl’s ass and his proud display of his “My cock + your pussey = good times”  t-shirt are an embarrassment to himself, his team and his sport.  On the other hand, he is an immensely talented and unique cyclist.  Sagan is a top-tier sprinter who often falls just a bit short of winning against sprinters like Mark Cavendish and Andre Greipel (although he has and can beat either of them on occasion).  However, unlike any other top-tier sprinter in recent memory, Sagan can ride with the leading group over Cat 2, 3 and 4 climbs. 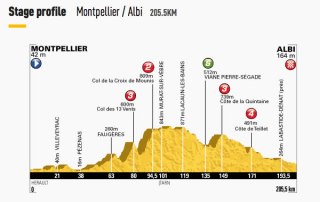 Tour de France on July 5th.  Stage 7 featured a Cat 2 climb about half way through the stage, a little more than 100 km from the finish.  Cannondale took the lead and drove the peloton with a hard pace over the climb.  Sagan could do it; Cavendish, Greipel and the other sprinters could not.  The sprinters fell about 2.5 minutes behind Sagan and the Cannondale-led peloton.  Their teams fell back to try and bring them back to the peloton after the climb, but Cannondale set a ferocious tempo and when 90 minutes of chasing did nothing to close the 2.5 minute gap, the sprinters gave up.  The result was that Sagan had no strong competition and he won both the intermediate sprint for 20 points and the stage for 35 more points while his competitors for the points jersey won nothing.

Cannondale may have demonstrated a unique approach to winning the points jersey that is perfectly tailored to the talents of their unique sprinter.  Compete in the sprint stages but don’t build your team for them.  Sagan is a talented enough sprinter to finish in the top 5 on most

sprint stages without the benefit of a strong lead-out team.  Build the team to do just what they did today; control the peloton and ride hard tempo on intermediate mountain stages.  Sagan loses a relatively small number of points to his competitors on the sprint stages  but he gains a massive point advantage on stages that feature any kind of categorized climb that is difficult enough to defeat the pure sprinters.

A team built along these lines with Sagan as the team leader is going to be very difficult to beat for the points jersey in any of the grand tours as long as the other sprinters can’t climb and come to these races with custom built lead-out teams.

2 thoughts on “A New Strategy in the Tour de France?”