Information about the glycemic index and many other topics can be found in Nutrition for Cyclists: Eating and Drinking Before, During and After the Ride which can be purchased on Amazon.com.  For information about the book and how it relates to what I’ve posted to Tuned In To Cycling, please check out this post.

The diet industry is big business; in the US it is estimated that people spend in the neighborhood of $35 billion dollars a year on diet-related products.  (To make that number more comprehensible, if you make $50,000 a year Americans spend your yearly salary on diet products approximately every 80 seconds.  24, 7, 365.)  A large part of this industry relies on consumer ignorance and gullibility to enable the promotion and sale of one fad diet idea after another.  One of the ideas heavily promoted in the diet industry is the glycemic index.

Is the glycemic index useful? Yes.  Is it all the diet industry makes it out to be?  Not even close.  For our purposes here, is it useful to cyclists?  I think the best answer here is – marginally.

First of all, what is it?  The glycemic index is an indicator of how long it takes food to be converted to glucose in the blood.  Glucose is the fuel that muscles burn when they are working and on-the-bike cycling nutrition and performance is largely about glucose production and consumption.  Having an idea of how long it will take to get the food you eat while you ride converted into blood glucose has the potential to be very useful. 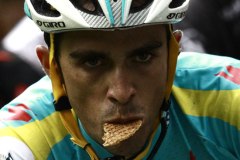 This sounds like it should be of great use to the cyclist.  You’re burning glucose constantly on the bike, you need more, you’re eating to get more, the glycemic index will tell you what to eat to get that glucose as quickly as possible.

It’s all good, right? Not really. Why not?

The glycemic index of most food varies with so many factors that the rough idea the glycemic index gives you of which foods are converted into blood glucose faster can be very rough indeed.  Here are some examples.

The glycemic index values that are used to define the categories in this image are rough guides.

WARNING:  The nutritional needs of a person engaged in 60 to 90 minutes of moderate to intense exercise or a long ride lasting more than 2 hours are very different from the nutritional needs of that same person going about their daily activities.  High glycemic foods can be very useful while you’re on the bike.  A steady diet of high glycemic foods when you’re not engaged in endurance exercise has been shown to be related to various health problems such as obesity (and all of its related problems), diabetes and, at least in animal studies, a shortened life span.  High glycemic foods eaten while you’re riding will generally help you.  A day-in, day-out diet of high glycemic foods when you’re not exercising will generally hurt you.

8 thoughts on “Cycling Nutrition: The Value of the Glycemic Index for Cyclists”