You’re riding along at a speed that takes some effort. It’s difficult. What makes it hard? What do you have to overcome that is demanding all that effort to maintain your speed? You ramp it up and go faster. Now it’s even harder and it takes even more effort to maintain the faster speed. Why is it harder? What changed?

When you’re riding your bike there are four factors that resist your forward movement. One of them is gravity but gravity only comes into play when you’re going uphill. You have to provide enough power to carry the combined weight of you and your bike upwards against the earth’s gravitational field. You want to fly up the hill but the earth says not so fast.

When you’re not going uphill, gravity is not doing much of anything to hold you back but it still takes effort to move forward and the faster you go, the more effort it takes. You’re fighting against three types of resistance: drive resistance, rolling resistance, and air resistance. They all take effort to overcome but air resistance is, by far, your biggest enemy.

Another way to eliminate rolling resistance

Rolling resistance refers to the force you have to apply to overcome mechanical resistance coming from the parts on the bike that are not part of the drivetrain that are moving when you’re rolling down the road. This includes things like the friction of your tires on the road and the bearings in your wheel hubs. You can reduce rolling resistance by making sure your tires are not under-inflated and replacing the bearings in your wheel hubs when they wear out.

Air resistance refers to the force you have to apply to displace the air around you as you move forward. When you move forward your body and your bike are moving into a space that was occupied by air. It would be nice if the air saw you coming and got out of your way but it doesn’t work like that. The air resists and has to be pushed out of the way. As we will see, unless you are climbing a steep hill most of the effort you are putting into pedaling your bike is being used to overcome air resistance.

The graph on the left contains a lot of useful information about where your effort is going when you’re pedaling a bike. The graph shows how much power (measured in watts on the ordinate or y-axis) it takes to move a standard racing or road bike forward at different speeds (measured in kilometers per hour on the abscissa or x-axis). The graph assumes an average sized rider, on an average bike moving forward on a perfectly flat surface – which doesn’t describe any of us with perfect accuracy when we’re out riding our bikes. For this reason, the exact numbers shown in the graph aren’t what is important. When applied to you or me at any moment in time on a specific ride the numbers are likely to be a wee bit off. However the general relationships shown in the graph will hold for all of us all of the time.

Looking at power in terms of watts may not seem very useful if you do not have a power meter on your bike that tells you how many watts you are producing as you pedal. Another way to look at power is to think of it in terms of effort. What the graph shows as an increase in power measured in watts, can be understood as an increase in the effort it takes to ride at a faster speed. In other words, the higher the power requirement, the more effort you have to expend.

What useful information can we get from the graph?

Overcoming air resistance gets harder and harder the faster you go. How quickly does the increase in effort needed to overcome air resistance ramp up? 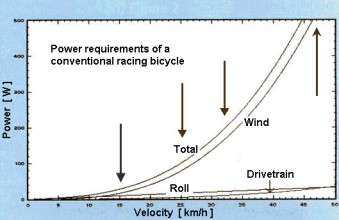 What would riding a bike be like if you didn’t have to overcome air resistance? Reading from the graph, it takes about 100 watts of power to overcome the combination of rolling, drive and air resistance when you’re going 25 kph (15.5 mph). If you take air resistance out of the equation and imagine the linear functions for rolling and drive resistance extending beyond the 50 kph boundary on the right side of the graph and continuing to increase at roughly the same rate, that same 100 watts of power would be sufficient to move you forward (on a very rough estimate) at a speed of about 125 kph (77.7 mph).

Okay, air resistance is the problem. What’s the solution? There are many ways to reduce air resistance such as riding in a full aero position on the bike which is both difficult and uncomfortable, spending tens of thousands of dollars on a high tech aerodynamic bike and a sleek aerodynamic kit, and some simple and much less demanding riding techniques that can provide small but significant benefits. We’ll examine some of these simple techniques in Aerodynamics Part 2.