This is one of a series of posts designed to help people who are new to cycling get started.  In earlier posts I recommended that you buy your bike from a good bike shop and suggested you think about how you’d like

to use your bike before deciding what kind of bike to buy.  The kind of bike you ride and the kind of riding you want to do are so closely related that I recommend you take a look at “What Kind Of Cyclist Do You Want To Be?” before reading this post if you haven’t done so already.

The first and probably most important decision a new rider has to make is what kind of bike to buy.  Choose the right kind of bike at the beginning and you may be opening a whole new world that will give you years, maybe a lifetime, of enjoyment.  Choose the wrong kind of bike and you may have just bought an expensive garage ornament.  There are so many different types of bicycles out there and so many variants on each of those different types that it would take a book to cover them all.  It would also be useless information for many new riders because most of the variants are designed to fit a highly specific need or small niche in the cycling market.  Most new riders will be faced with choosing some type of road bike, mountain bike or hybrid.  If you are at all unsure about which type of bike is right for you, renting a bike for a day’s or weekend’s worth of riding is highly recommended.  This post takes a more detailed look at road bikes.

Road bikes are designed for speed and efficiency.  No mechanical device ever invented converts energy expended into forward motion as efficiently as road bike.  Indeed, no organism on the planet – not a cheetah at full sprint nor a swimming shark – is as efficient at controlled forward motion as a skilled cyclist on a road bike.  Because it’s your legs that are doing the work, you will come to love the efficiency of a road bike as you fly down the road with the wind in your face and the burn in your legs.

Weight reduction is a driving force behind road bike design.  Compared to all other types of bikes, they have the lightest frames and the lightest wheels.  The main difference between a basic road bike and a racing bike is that everything about the racing bike – the frame, wheels, seat, handlebars, drive train, bottle cages . . . everything – is lighter (and consequently much more expensive).  The focus is on weight because it takes less energy to move a small weight than a large weight.  Put another way, for the same amount of effort expended, you’ll go faster on light bike than a heavy one.  Where the weight really comes into play is on hills where you not only have to push the bike forward, you also must lift the combined weight of the bike and the rider up the hill against the pull of gravity.  Weight is also a factor on flat roads but if you’re riding fast enough a heavier more aerodynamic bicycle can be better than a lighter bike that is less aerodynamic.  If you are a new rider, you’re not going to be able to maintain a speed that is fast enough for the weight vs. aerodynamics issue to matter.  Weight reduction on road bikes can become something of a fetish and it is not uncommon to see guys in the bike shop with more money than sense spending an extra $250 to shave 75 grams off the weight of their handlebars when they’re carrying an extra 10 lbs of fat inside their jerseys.

Road bikes have skinny, smooth tires in order to reduce rolliing resistance which is the friction between the 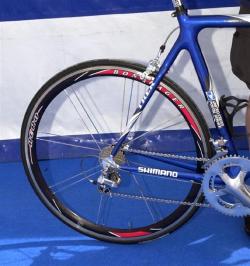 tire surface and the road.  For the same reason, the tires usually are inflated to very high pressures.  On the down side, reducing rolling resistance with skinnny, smooth, high pressure tires produces a bike that is more subject to losing its grip on the road.  On the up side, these wheels and tires make the bike handle more responsively.  Road bikes handle with a quick and nimble feel in comparison to hybrid or mountain bikes which can feel slow and ponderous.  Keep in mind that what may feel more responsive to one rider may feel twitchier to another.  The bottom line is that on paved surfaces road bikes have to be handled with more care than bikes with fat, knobbly, low pressure tires.

Road bikes also have those distinctive curled under handlebars.  By bringing the rider’s center of gravity forward, they reduce some of the handling problems introduced by the road bike’s skinny, smooth tires.  But that’s not all the handlebars do.  New riders will often take one look at a road bike and say “Being bent over like that looks so uncomfortable, I could never do that.”  Actually, just the opposite is often true; road bikes can be more comfortable than hybrid or mountain bikes especially if you are going to spend more than 30 minutes riding.  Flat handlebars allow basically one position for your hands.  If you are going to spend any time at all on the bike this can lead to numbness in the hands and tightness, stiffness and discomfort in the neck, shoulders and both upper and lower back.  The curved handlebars provide three very different hand positions, on the flat part of the handlebar on either side of the stem, on the brake hoods, and down in the drops.  Take a look at this picture.

The riders in green at the front and black at the back have their hands on the hoods, the rider in red has his hands on the bar, and the rider in aqua has his hands in the drops.  Switching among these three positions while you ride can be very effective in eliminating all of the problems associated with flat handlebars.  Bending forward also reduces pressure on the lower back in comparison to the more upright position you get with straight handlebars and for this reason can be much more comfortable for people with lower back problems.  Also, pedaling while you are bent over curled handlebars is much more efficient than pedaling in the flat handlebar, straight up position.  This increase in efficiency interacts with the lessened pressure on the lower back so that the curled handlebars can produce more benefits for people with lower back problems the harder they’re working on the bike.

There are three basic types of road bike that the new rider may wish to consider, the basic road bike, a racing bike, or a touring bike.  As noted above, racing bikes are basic road bikes with better frames and better gear.  The geometry of a racing bike (the lengths and angles of the tubes that make up the frame of the bike and determine the position the rider is in while riding) is likely to be a little more agressive (head lower, ass higher, and body more stretched out) than a basic road bike as well.  For this reason a basic road bike may feel a bit more comfortable for the new rider.  Basic road bikes are built to go fast, racing bikes are built to go faster.  Touring bikes look like road bikes but they are designed for the rider who wants to travel from place to place on his bike while carrying all his stuff with him in panniers (packs which are carried on a frame over the rear wheel).  Touring bikes emphasize comfort after long hours in the saddle over speed.  The tend to be heavier with a more relaxed geometry and a longer wheel base which helps soak up the bumps in the road.

Road bikes have the significant disadvantage that they’re expensive.  Entry level road bikes from reliable manufacturers start around $900 but the next level up at $1200 may be a better purchase.  Bike shop managers who I trust without reservation tell me that more often than not the $900 models end up parked in the garage when the buyer’s initial burst of enthusiasm wanes or come back to the shop when the new cyclist realizes the $1200 model better suits their needs after they’ve had a month or two of experience on the bike.  The $1200 models also have a much better resale value if you come to realize you made a mistake.  $1200 is more than many people will want to spend at a point in time when they don’t know if they’re really going to get into cycling or if a road bike is what they really want.  If you’re unsure if a road bike is the right kind of bike for you, renting a road bike for a day or a weekend is strongly recommended.  If you know you want a road bike but $1200 is out of the question, a used bike from a reputable bike shop may be the answer.

If your primary interest in riding a bike is fitness, strength, endurance and athleticism, a road bike is the bike for you.  You can lose weight riding any kind of bike, but if you want to use the bike to lose a significant amount of weight and keep that weight off, you’re going to have to make riding a regular part of your life and a road bike would be ideal.  If you’ve been kicking around on your hybrid and the idea of doing one of your local century rides (an organized bike ride of 100 miles) is becoming more and more intriguing, it sounds like there’s a road bike in your future.